Back to Being 7 Years Old

As a kid, and in to my high school years we traveled a lot as a family.  We were always going places to see family but we stopped at lots of the national parks and things in between.  We also used to listen as my mom would read Roadside Geology of the United States.  This book tells you all about the surrounding geology given what road and mile-marker you are at.  It's really fascinating.  I never wanted to be a geologist, but I loved loved loved learning about the geology across all the states we went through.  I remember a small bit about going to Carlsbad Caverns the time that we went (although I learned when we went this time that part of my "memory" was really about somewhere in Mississippi or Missouri... oops!) and I remember loving it.  But that was back when I was small and I had been thinking about it a lot.  This Christmas break Abbey and I had the joint idea (chicken and the egg kind of thing for who actually gets credit...) to go back when we're all older, her kids might remember, and her husband could see.  I was ecstatic when my mom agreed.  And that was when I turned back into a little kid again....except this time the little kid has a camera!
My picture excitement started when we pulled into our hotel and the sunset was awesome.  I needed to get a picture of the dog's ear as well, those always fascinate me. 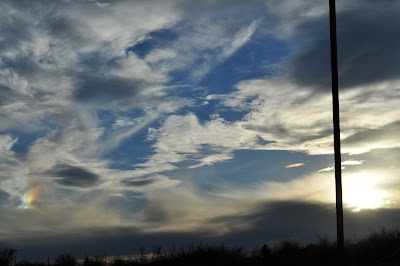 It was the next morning that we went to the caves and you drive up onto a little plateau to get to the entrance. Looking out across the prairie was gorgeous I thought.  Well gorgeous in a "ugly desert spiky ocatillo" kind of way. 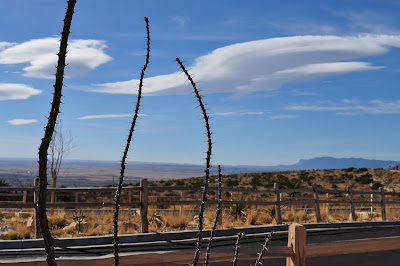 The entrance to the visitor's center. 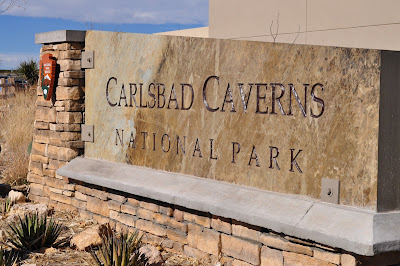 We decided to hike down through the natural entrance then we thought we would take the elevator back up at the end of the day.  There is this warning at the beginning of the hike and I thought it was hilarious.  Hilarious because you're hiking downhill.  Maybe they want to put that on the other end of the 1.2 mile trail 750 vertical feet down in the ground. 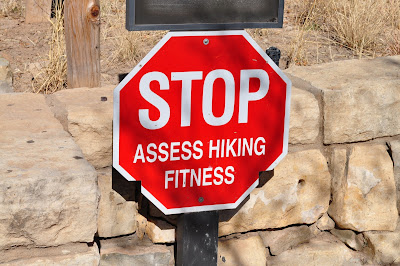 This is the natural entrance to the cave.  Well the close up version.  If we had come in the summer I would have forced my family to go back at sunset so we could see all the bats come teeming out of the cave for the night.  But sadly, the bats winter in Mexico.  Gorgeous though right?  The amount of detail that is entirely etched by water and wind.  Mind boggling. 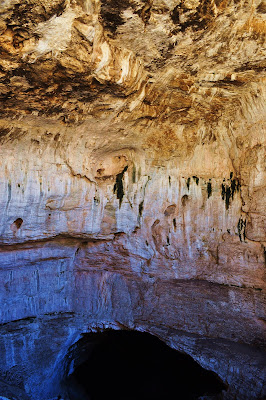 These are called draperies, and it's what happens when water and sediment drip down the side of the cave wall.  The caves we were in weren't really "living" caves, which means that they're dry for the most part, so the draperies, stalactites, and stalagmites aren't still growing.  There were so many caves behind caves, and caves through holes.  I couldn't quite capture it, but I tried really hard!! 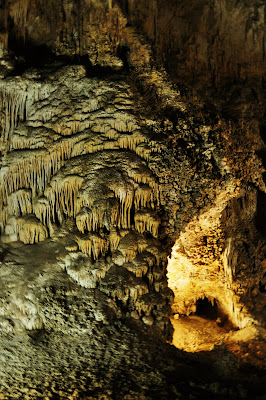 It fascinates me how all these things can grow and be shaped and still be their own entity.  They're all entirely separate even though they're formed in the same way.  In this picture alone you can see stalactites, stalagmites, cave popcorn (the bumpy stuff on the right side), and draperies. 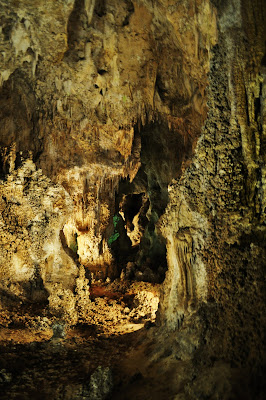 When a stalactite and a stalagmite grow together it forms a column.  They are the most beautiful imposing things I've ever seen.  This column was about 4 feet in diameter.  Ahmazing. 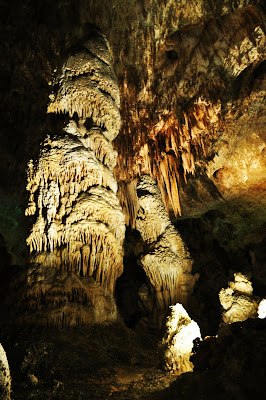 This is my favorite picture of the trip.  Sadly it doesn't even capture the things that I could see in person.  But it's still my fav.  The stalactites look so delicate, and yet they're made of rock!  And they're completely untouched and as natural as anything.  I can't even explain how much I want to gush about how cool it is to witness something so amazing and natural and know that man had absolutely NOTHING to do with it.  We were 750 feet directly down into the earth and still this stuff forms.  Absolutely amazing. 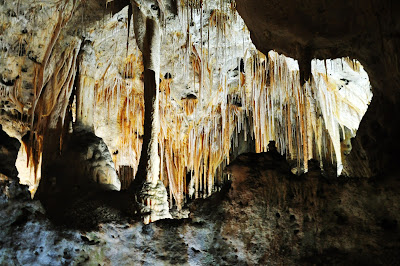 This is my tribute to some of the photographs that were taken when the caves were first discovered.  The man who discovered them, Jim White, couldn't get anyone to come see them until he dragged a photographer down to take some pictures.  My tribute would be much better if I had a tripod but I will settle :).  The black and white is pretty cool though and still manages to capture the subtleties of the features. 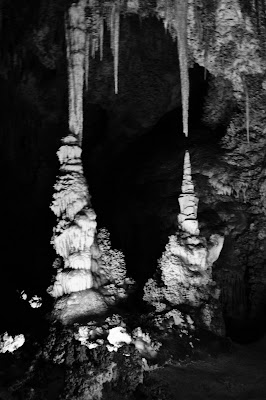 I was so excited to go to the caves and even more excited that I got to share it with my fantastic family. 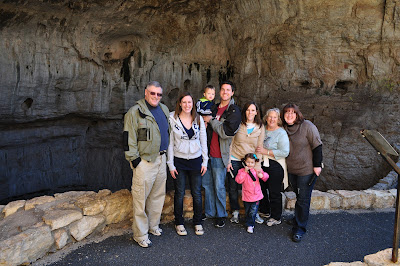 A Montage of Thoughts and Restitutions

I just got back from Christmas vacation, which was completely awesome.  I'll have an entire post dedicated to Carlsbad Caverns so this post is just a few thoughts I had over break.  First I got my car back just before the break.  I was in a collision with an unfortunate deer and didn't have it for three and a half weeks.  My friends, that was hell.  Being without a car was just maddening.  Now that I have it back I've realized that the saying is true that your car is never the same after an accident.  By looking at it you can tell no difference (except one headlight is much clearer than the other), but inside and driving it is much louder than it was before.  They had to replace part of the door and it now whistles when I'm going fast.  Fairly annoying.  I'll have to get used to it.  But it is sad to think that the car I knew and loved now has to become something I just get used to.
On a different traveling note, I adore airports.  I don't like flying in planes much because I am terribly fidgety (however speed is always appreciated), but I love watching the people in the airport.  And listening to their conversations but I try not to let anyone know that I actually do that.  But the funniest part for me is when everyone is waiting to get on the plane.  People get SO angry and SO impatient.  Is it hard to understand that we will all be on the same plane??  This is even more fascinating when we have assigned seats.  I just don't get the impatience.  But it's fun to watch people get unbelievably agitated about being FIRST in line!  They obviously deserve it : ).
My last thought is about New Years Resolutions.  I make them every year and I do enjoy thinking about them.  I was thinking about them this year though and the things that I want to do better this year than last, and it kind of turned into "what are Heidi's vices".  I don't know if it's always like that, or that's just what it is this year but it was a tad depressing.  I still pressed on though and made my resolutions.  Maybe my vices will diminish this year haha.