What I wish I was great at

A little while back, well 8 months ago, I posted a list of things that would be fun to write down for posterity.  My dad is turning 60 in two weeks and I just realize that, while I know a lot about him, there are a lot of funny stories that I don't know, and quirks I don't know the back story of, etc.  So in an effort to not have that happen with my children, back to this list.  I'm not doing them in order, so this is just the first that strikes my fancy.

So this one is to explain what I wish I was great at.  Uh.  Easy.  Hip Hop Dancing.  Like hands down.  I religiously watch So You Think You Can Dance, which I affectionately call SYTYCD and I just wish I could hip hop dance.  The other dancing is pretty, yeah, and makes people cry, but I really just want to be able to shake my hips.  NOT in the twerking sense of the word, let's get that straight.  But like, good, popping, hip hop dancing.  I even took a class back when I was in Ann Arbor with a friend.  A free community hip hop class.  I only made it two classes before we both decided that we be too white for that.  So... my dream died.  But I still fake it along with SYTYCD and I occasionally have dreams when I'm a good dancer.  I wish they were reality.  It would complete me.

So.  I admit it.  I've been a little of a failure at blogging recently.  Well a little more than recently, we'll try the last two years.  BUT!  I would like to be better, because I would like to share more about my little baby's life with the people that I love and care about.  Plus we all know my baby smarter than yo' baby!

But really though.  Look at this little face: 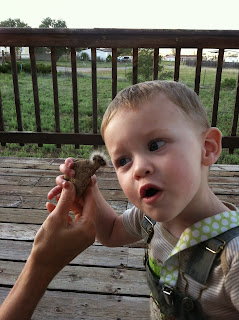 Back on track though.  I was thinking a good way to get back into this blogging this is to post little updates on our little family now and then!

So here we go.  Since most of my life is about Ryan, and honestly the most changes, we'll begin with him.

My goodness the boy is 18 months old!  That means he's started nursery at our church and, it took three weeks, but last week he went all by himself the whole time and had fun!  The first few weeks he was good for about half the time then decided that it was a little risky and that other children are basically untrustworthy.  But we're warming up to them and trying not to hit too much.  Yeah, he's a hitter.  But he mostly hits out of excitement so that makes it better right?  He also loves to throw things.  And if he gets angry he will, with forethought and calculation, look around for what he can throw that will do the most damage.  Too smart for his own good.  His grandma just told me today that he will now, knock over the kitchen chairs, drag one over to the kitchen counter, stand the chair back up, and then climb up on to the counter.  I thought problem solving came later???  He loves animals, especially the many dogs and horses that are our immediate neighbors.  He needs to feed the horses carrots quite often, he opens the fridge and gets the carrots out, then comes and grabs your hand to take you to the door.  He has an array of animal noises, including the normal dog, cat and pig, and also, rabbits.  He's just beginning (in the past few weeks) to talk a lot and he will mimic pretty much anything you say.  He says lots of things pretty clearly, including drink and ba-ba, for bottle.  He has also started saying "ow" which is about the cutest thing I have ever seen.  He even makes a sad face when he says it.  I'm going to film it but I haven't yet.  He is the epitome of a wild child, very often making me tired just looking at him and watching him run around and yell and scream and wrestle with daddy.  He is also fascinated with bugs.  As you can see from the pictures he just loves them all.  And as we have a situation bordering on plague status with all the grasshoppers around our house, he has lots of opportunities to pet them and chase them.  And last but not least, he has mastered the fact that if he's too scared to touch something, grabbing mom's finger and having her touch it is an excellent litmus test for how dangerous it actually is.

Andrew and I are good, but just as boring as ever.  We just go to work and go to school and chase Ryan around.  But we're good!  And really liking this marriage/family thing, most the time :).  I've read so many of these articles that friends have posted on facebook about how to be happy, and you didn't really love your husband when you married him, and how to be the perfect parent.  And basically I disagree with 80% of all them...  But I don't post any of those opinions on facebook because I don't want my friends to hate me haha.  If you want my opinion I'll always be happy to give it, especially on those three subjects... but let's not ruin a happy moment :).  I'll just end with more pictures!! 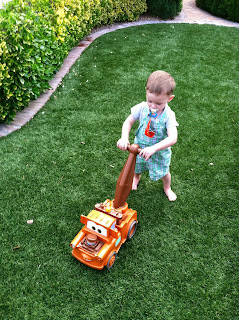 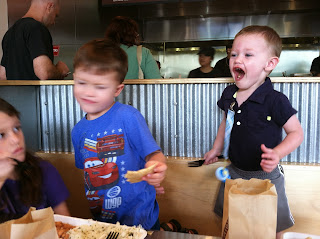 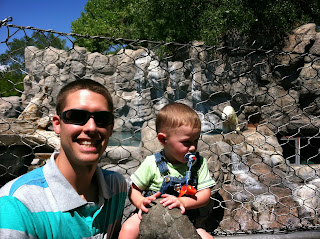 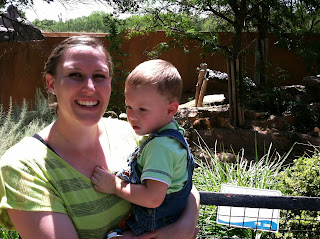 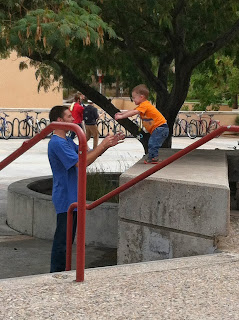